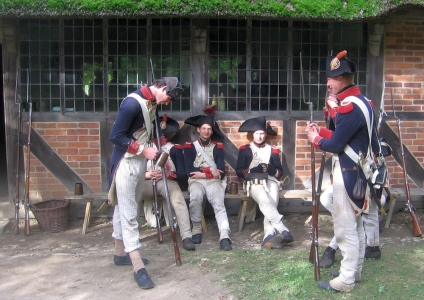 On 24th October 1987, a couple of enthusiasts founded our unit, in order to be prepared in time for the bicentennials of the Revolutionary and Napoleonic Wars.

In the course of the years we changed our name for several times, thus we were subsequently called:

We represent the grenadier company of the second batallion of our demi-brigade in the year XI of the Republic (1802-1803). At the moment, we only have members in Germany, but we are happy to welcome new grenadiers (or guests) from all countries.

Our aim is to experience as many aspects of the soldiers' lives 200 years ago as possible (and reasonable). Therefore we do not restrict ourselves to pure "battle re-enactment", but try to live, all around the clock, exactly as the soldiers of those times did. Our focus is on: 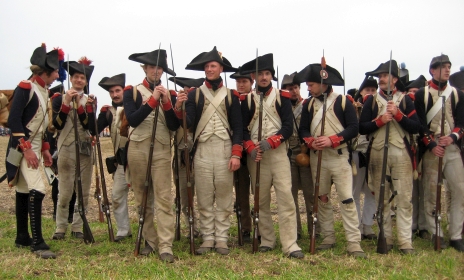 Our whole equipments is made according to the regulations and cut patterns of the period. What does not match the style of the Napoleonic times, is left back at home. If, for example, someone hasn't got historical shoes, and those in our depot are alreay lent out to somebody else, he walks barefeet or tries to find an authentic solution with foot wrappings or the like. In a good mood and with mutual help there are no problems which cannot be overcome.

We only use what we can take with us on the march. Thus, exactly as the French soldiers of the Napoleonic times, we haven't got tents, but luckily we usually get plenty of straw, and we rarely encounter rain. This sounds more "dangerous" than it is. With a big campfire, straw and a greatcoat or blanket every kind of weather condition thing can be easily passed without getting ill. Those, however, who still don't believe it, sleep in faithfully reconstructed French military tents filled with straw.

We adhere to the dressing rules of the time, even if it is very hot: hat, neck stock, no visible shirt sleeves. NCOs always wear uniform and hat. Of course we drill a lot. The muskets are cleaned with the means of the period, the other parts of equipment and uniform as well. We make our fire with steel, flint and tinder, and (in the public) we only smoke the pipe. In the cheerful atmosphere of our group so-called uncomfortabilities are quickly forgotten. 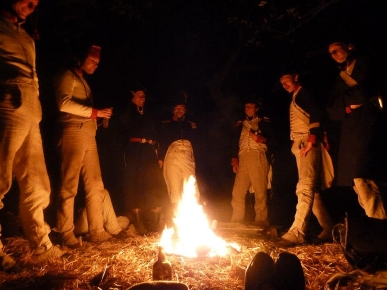 Our cooking is done with the equipment in use 200 years ago: gamelle and marmite, which are put into the fire. Iron tripods or grill grates are not necessary for preparing a decent meal, and their weight would be an extra burden on the march. We just don't take food with us in the field which is wrapped in plastic or other modern materials or which has to be cooled - so there won't be butter nor marmelade for the bread, but the soldiers of the Napoleonic period didn't have it either. The French military bread which we bake is very delicious even when eaten plain.

We spare ourselves some ubiquitous aspects of those times, such as vermin (lice and the like) or unfriendly or despotic superiors. The retreat in the evening is left out (but not the punctual reveil in the morning). Hardships such as exercise in the plain sun or standing guard all night are avoided, if they are not necessary. Also in plundering, pillaging and enforced contributions we do restrict ourselves a bit.

Of course, women are not accepted as soldiers in our ranks, 200 years ago their place was in home and kitchen. (But if you are a woman, present yourself to us as a man, and manage to dupe everybody, the more power to you !)

Are you strong enough to carry a musket and a fully packed French backpack?

Are you willing to learn in the course of the time how the French infantry drilled according to regulations, as well as the other skills of a French soldier in the year XI of the Republic?

And are you looking forward to smell the smoke of campfires and the fog of Napoleonic battles ? Sleep under the open sky or an improvised shelter, march in storm, rain and snow, and share any other inconveniences with your jolly comrades ?

For guests or new recruits who want to get a first glance on the hard and the happy aspects of soldiers' lives 200 years ago, we have got a stock of spare equipment (including shoes !), which will also help in the time when you are getting your own uniform and equipment - after you (of course !) have decided to stay in the French army.

We are happy to welcome members from all European countries in our ranks ! And if you are going to build a squad of the 22e demi-brigade de ligne in your country, we will give you all our support ! 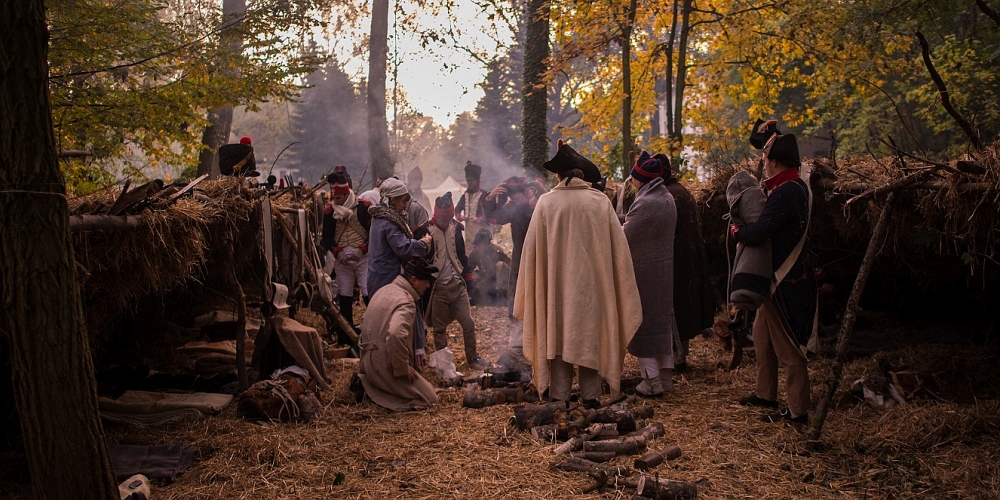